GEMAK created the design of this series of valve AS-A in order to eliminate the problems, found to the irrigation-water supply and pumping networks. AS-A series valves are hydraulically operated by

means of a diaphragm which is located to the interior of the valve. Their regulation does not need any special knowledge. By mounting various pilots or three-way 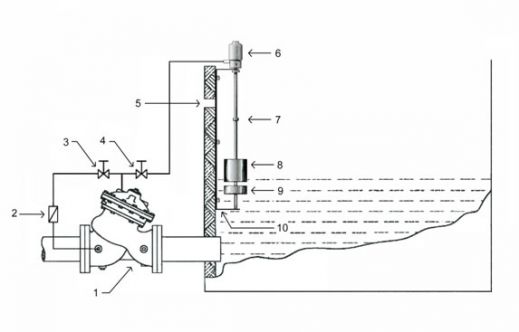 electromagnetic valves on their body, a large range of applications is achieved and all demands for regular and soft operation as well as for total protection of the waterworks are covered.

By using additional equipment we can control the opening and closing speed of the diaphragm from 0.2 up to 180sec creating ideal conditions for the safety and protection of pump stations and water networks. The valve series AS-A is available in two types: 1) Type Υ double chamber and 2) Angle shaped type with single and double chamber

The valves of the double chamber give the ability for multiple applications and smooth closing and operating (T=0.2sec-180sec) and therefore the creation of even a small pressure surge caused by the valve itself, is avoided. The valves of the single chamber have a limited margin of applications but they give the same safety and operation conditions as those of the double chamber, when they are used for the regulation of pressure and the immediate relief of pressure.

Secure operation of the pump, which is regulated by the valves so that it operates according to the constructor’s preset limits. In case of line break the valves protect both the pump and the drill, as they close immediately when the pre-set limits are surmounted.

Diaphragmatic valves can function, either electrically on ON-OFF conditions or hydraulically with capability of proportional control operation, (opening closing from 0,2sec to 180sec).

Due to their special design, maximum flow with minimum losses is achieved. The material used for the body’s construction is ductile iron of spheroid graphite GGG40/50 DIN 1693/ EN 1563. The main part of the internal mechanism, is the diaphragmatic actuator. The actuator’s diaphragm is a membrane, made of nylon reinforced neoprene of high resistance and flexibility. This, divides the chamber, which is between the actuator’s base and the cover, into two parts which are fluctuated according to the accepted rate of pressure. The membrane is tighth to the end, with stainless steel bolts and held by two discs, made of copper DIN 1705 CuSn12 or steel GS45.The sealing disc is copper DIN1705 or steel GS45 with an elastic gasket made of EPDM for absolute water tightness and long life time. Between the actuator’s base and the sealing disc, a stainless steel AISI 316 spring is placed which presses the sealing disc tighly. By connecting different pilots and electromagnetic valves we can achieve various application s for the smooth operation of the network.

The difference in pressure which appears in the two chambers of the actuator, through the pilot and the pressure inlet, is responsible for the axial movement of the mechanism and the automatic operation. The valve will open when the inlet pressure exceeds the outlet forces of the upper diaphragm and spring. In the case of equality between the outlet pressure and the regulated pressure, the valve tends to close, due to the pressure caused by the spring. This operates as check valve and closes totally when the inlet pressure is lower than the regulated outlet pressure.